Teams from local schools will compete based on their knowledge and understanding of the Constitution and Declaration of Independence.

Upon receipt of your registration we will send additional information including rules, procedures and study materials.

Scroll down to learn about the 2021 Constitution Bowl! 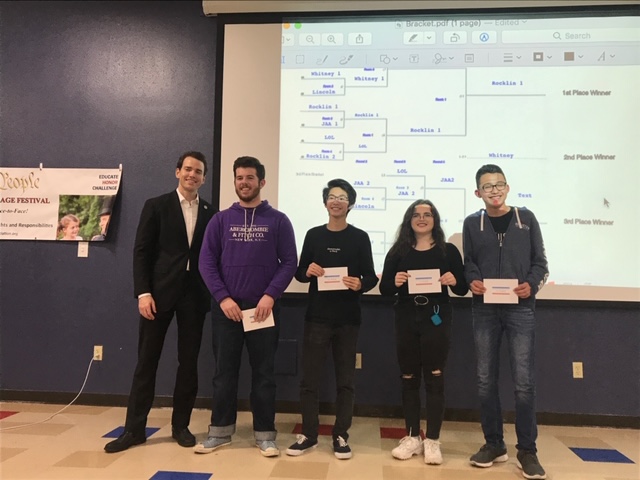 There was lots of excitement at our inaugural Constitution Bowl on Jan. 29 at John Adams Academy as students from local high schools raced to beat the buzzer and answer questions about the Declaration of Independence and the US Constitution!

Assemblyman Kevin Kiley was the keynote speaker.  He lauded the participants for their understanding of the Constitution.  Several spectators and participants commented on how much they were able to learn about our Constitution during the event.

Lesley Bell works in public service for the State of California developing, implementing, and interpreting state and federal policies for human service programs and serving as a liaison with 26 counties.  Ms. Bell is a board member of the Western Intergovernmental Child Support Engagement Council and volunteers with the National Child Support Enforcement Association as a speaker and workshop coordinator.

Prior to working in health and human services  Ms. Bell worked for state and private entities overseeing claims management and workers’ compensation fraud.  She has a Bachelor of Arts degree in Public Relations and Spanish from the University of Utah, is a graduate of the California Health and Human Services Agency Leadership Development Academy, the Child Support Directors Association Leadership Academy, and the Intergovernmental Management Training Program. Her proudest accomplishment is serving as a Junior Foreign Service Officer with the Department of State while in college.

Keith Bolte is an AssociateProfessor of Public Policy and Lead Faculty for the Criminal Justice Program at William Jessup University. Prior to joining the faculty at the WJU, Professor Bolte was a Chief Operating Officer specializing in rebuilding large law firms that had experienced an unexpected loss of major practice areas.

Dr. Andrew D. Carico serves as Assistant Professor of Public Policy and Chair for the Division of Humanities at William Jessup University. He earned his Ph.D. in political science from Claremont Graduate University, and his doctoral work was in the area of presidential rhetoric, with an emphasis on the constitutional rhetoric of the Obama presidency. More broadly, his research and teaching interests lie in the fields of American politics, constitutional law, and political philosophy.

Dr. Carico has written for The Public Discourse and Starting Points Journal, and he has presented original research at multiple academic conferences. He is also currently working on a book project analyzing the origins and meaning of the presidential oath. He hopes to inspire his students to understand the importance of political engagement and to cultivate civic virtue. Dr. Carico’s wife, Allie, is a school administrator, and they have two children.

Phillip Escamilla is Associate Provost and Dean of the Faculty of Humanities and Social Sciences/Visual and Performing Arts at William Jessup University. He also serves as Chair of the Public Policy Department and the Jessup Institute for Public Policy.   He has a Bachelor’s degree from the University of California at Berkeley, a Master’s degree from Harvard University and a law degree from Boston College.

Professor Escamilla previously worked in the public sector, where he advised elected officials and staff at the local, state, and national levels on education policy. In ministry, he has served as a church planter, pastor, and human resources administrator.

A 13-year resident of Placer County, Phillip and his wife Lisa, a nurse, have three children.

Audrey Perry Martin is Of Counsel to Bell, McAndrews & Hiltachk, LLP where her legal practice is focused on political, election and constitutional law.  She is an adjunct professor at BYU Law School, where she teaches a course on Election Law.  Ms. Martin previously worked as Deputy General Counsel for Romney for President, FEC Counsel for McCain-Palin, and Deputy Campaign Manager and General Counsel for Steve Poizner’s 2010 California Gubernatorial race. Ms. Martin worked as Legal Counsel to the Committee on House Administration of the U.S. House of Representatives where she focused on issues such as election integrity, congressional ethics, and campaign finance. Ms. Martin also worked at the Federal Election Commission and at the DC law firm Caplin & Drysdale. She received her law degree from Georgetown University Law Center and a bachelor’s degree in political science and journalism from Brigham Young University.  She fondly remembers competing in a national U.S. Constitution competition in Washington, DC while in high school.